Great story about the over the top benefit for Stanford U. Hospital!

There are parties, and then there is Jillian Manus and Alan Salzman’s “Channeling Love 2011” extravaganza to benefit Stanford Hospital Cancer Center. Now in its sixth year, the Valentine’s party is about as over-the-top as a benefit gets, always full of surprises, always with an irreverent theme, and always for the same worthy cause inspired by Salzman’s mother Helen, a three-time cancer survivor. This year it was all about 70’s TV shows, in all of their cheesy dialogue and bad hair glory.  For those of us who spent our after-school hours riveted by our friends Starsky, Charlie, Gilligan, Rhoda, and Marcia, Marcia, Marcia, it was an amazing experience to walk into scenes we had only stared at, glassy-eyed, on our Magnavox.

Manus and Salzman  abundantly underwrite the at-home affair, and then planner extraordinaire Robert Fountain makes the magic happen on Channels 2,4,5,7 and 44. (Anyone under thirty is completely confused at this point, serves you right for not remembering “what a bummer” black and white TV was.) Guests arrived on the balmy night in Atherton to Love Boat-attired valets and Rod Serling entering the Twilight Zone, which turned into a psychedelic inflatable walkway flanked by a dozen old school portable televisions beaming their cathode-tubed Jeffersons, Charlie’s Angels, Maude, and The Brady Bunch into the night.

As you approached the front door, there was the entire burgundy polyester-clad Partridge Family performing in front of their primary colored tour bus, waking up in Love this Morning and Went to Sleep with You on My Mind. (Where have you gone, David Cassidy?) Just inside the foyer, Archie Bunker was puffing on his stogie in his threadbare chair, while Edith plonked away at the upright. The Beverly Hillbillies colonized the dining room and installed a bourbon bar and their laundry fresh from washing in the cee-ment pond. Panch and Jon from CHiPs have removed their shirts and would incarcerate you upon request, and Laverne and Shirley have a game of beer pong lined up in the brewery. If you made it to the island, Gilligan was mixing potent boat drinks in the blender and providing a live parrot for your shoulder, which primed you for Bob Eubanks recruiting you and your date for The Newlywed Game, where you’ll admit to “making whoopee” in unusual venues. The Adams Family, including Lurch, Cousin It, and Thing invite you to the library for a glass of port, to be drunk at your peril. But first you had to visit the Saturday Night Live Samurai sushi bar, staffed by the Blues Brothers and a conehead from France. Meanwhile, over at the disco, Jillian Salzman, dressed in a fabulous white sparkly number asI-Dream-of- Jeannie channeling Cher, began the dance party in a tent that looked suspiciously like the inside of her bottle, Major Nelson be damned. If the Moroccan-themed buffet from McCalls’s wasn’t enough, you could always see how Lucy was doing in the candy factory with the conveyor belt, or just retreat to the powder room where Scottie has beamed up some Tribbles.
Even guests who’d seen it all, including, Attorney General Kamala Harris, philanthropist Tim Wu, and lots and lots of under-the-radar VC types, had never seen anything like this, regardless of how many channels their flatscreens had at home.  And with a cool $600K raised for the Cancer Center, there’s a lot of love to be channeled.  David Cassidy was onto something: Manus, Salzman – I think I love you.

Our Obama lookalike featured in a TV commercial in Hong Kong!

The call came in just before the Christmas holidays:  An advertising agency in Hong Kong requested our Obama lookalike for a Kentucky Fried Chicken TV commercial.  How could we refuse?  Later, we got lots of emails from friends saying the ad got featured on news programs.  Turns out the KFC parent company pulled the ad when some folks thought it was objectionable. Well, it aired right before Chinese President Hu's visit to the White House.   Oh well, we thought it was all in good fun!  What do you think?
Posted by Cast of Thousands Entertainment Co. at 11:19 AM No comments: 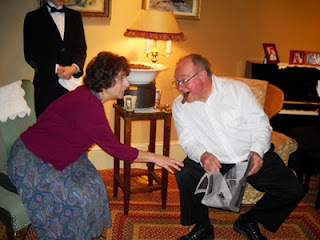 They sang "Those Were the Days!" Edith tried (unsuccessfully) to keep Archie from complaining about all the fancy people wandering through the foyer where they were holding forth. They bantered with guests, and added to the nostalgic festivities at the annual benefit for Stanford University's Cancer Center.
Posted by Cast of Thousands Entertainment Co. at 11:43 AM No comments: 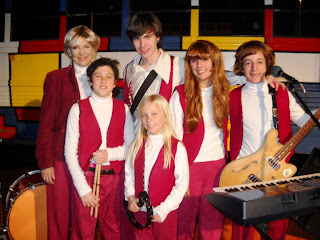 As guests entered the party, these talented singers and musicians wowed  everyone with their very faithful renditions of the Partridge Family's greatest hits.
(And yes, that's the Partridge Family bus in the background!)
Posted by Cast of Thousands Entertainment Co. at 7:52 AM No comments: