Great article about us in Sunday's Washington Post! Check it out!!

Political faux: Washington’s power players work hard to perfect an image — and so do their impersonators. 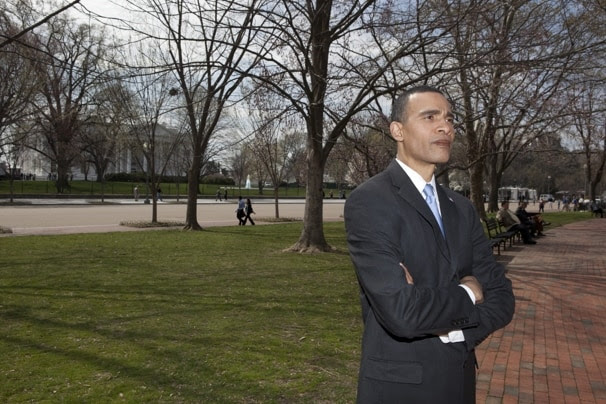 Two men in dark suits, hands to their earpieces, hurry through the crowd of partygoers. The guests — in town for a dental convention at the downtown Marriott — cast quizzical glances at them as they disappear up an escalator. When the men reappear, they’re just as serious. But this time, they’re not alone. Behind them is another man, about 6 feet tall, with a confident stance and wide grin, accompanied by an elegant woman. Immediately, eyes turn and whispers are traded.
Is that Barack Obama?
12
Comments
It’s a mistake that Larry Graves counts on. The 56-year-old has the president’s height and build, and his voice carries the same rhythmic quality. Both are left-handed. Graves makes slight alterations to his appearance — thickens his eyebrows, adds a mole, uses body wax to get his ears to protrude ever so slightly. But in the right suit, the right light, he causes double takes.
To be a celebrity impersonator, however, it’s not enough to just resemble a famous figure, says Jan Kearney, owner of the McLean-based agency Cast of Thousands. “Of course, that’s a big help, but they have to have a kind of spark or personality that is similar in charisma or feeling that you would have if you were with the actual celebrity.”
The District is a popular destination for professional conferences and corporate events, and Cast of Thousands hires impersonators out to groups that want to add a little pizazz to their gatherings. The look-alikes will stand for photo ops, give speeches tailored to the event’s theme, improvise conversations as they mingle with guests. Rates for an in-character appearance vary depending on the doppelganger and the event, and can be anywhere from $2,000 to $10,000 per performance.
These actors are the closest many visitors will ever get to being in the presence of our nation’s biggest decision makers. Some event-goers get a thrill out of the chance to trick family members back home with photos of themselves with “famous people”; others take the opportunity to praise or criticize as though the impersonator were the real deal. “I think people kind of enjoy the joke of being fooled, even if it’s for a few seconds,” Kearney says.
She says Cast of Thousands draws from the city’s active theater community to find versatile actors who can improvise and are eager for a side gig. Bob Heck is one of those people. “You’ll always get work here,” says Heck, whose oeuvre includes Washinton-friendly characters such as Bill Clinton and Larry King. “It’s a smaller talent pool, so it’s an advantage if you can do lots of things.”
And although Brad Pitt and Lindsay Lohan look-alikes might rule in star-saturated cities such as New York and Los Angeles, impersonators in political roles — from Obama to the Clintons to the Roosevelts — have carved out a niche in Washington.
It was a gang of fourth-graders that got Graves — who lives in Gaithersburg and is a substitute teacher and model by day — into the business.
During the 2008 campaign, “I had half of them out at recess asking me for autographs,” Graves says. “I hear at least three or four times a week: ‘You look like Obama.’ I just basically say thank you. It’s a compliment; I have no problem with it.”
If you'd like to read the full article, please click on:
http://www.washingtonpost.com/lifestyle/magazine/political-faux-washingtons-power-players-work-hard-to-perfect-an-image--and-so-do-their-impersonators/2011/05/25/AGgzlAYH_story.html?hpid=z4
Posted by Cast of Thousands Entertainment Co. at 11:02 AM 1 comment: